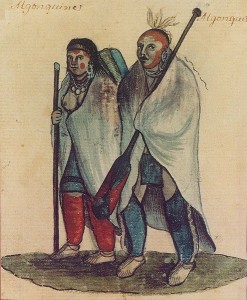 When European explorers came to the shores of what we now know as North America, they found they were anything but alone. Native Americans had been living in the New World for centuries.

From the west coast to what we now know as New England, tribes built their own societies and sustained themselves through agriculture, trade and hunting. Native American history facts are often misunderstood or simplified, largely because of the viewpoint of history which was written by white European settlers.

In the eastern United States, Algonquin tribes were among the first to meet settlers who arrived in Jamestown, Virginia. Relations were strained between the natives and the newcomers and underwent periods of both peace and bloodshed.

The hardships of the New World proved too much for many settlers, who died during the frigid winters. Native American history facts show the Indians in the region played a crucial role in helping settlers learn to harvest crops and keep an ample supply of food during the cold months.

Throughout the history of Native Americans, hundreds of tribes were part of the Algonquin people. They lived by hunting, fishing and cultivated corn, beans and squash. The Algonquin of the East Coast didn’t stay in one place and set up temporary and mobile villages, choosing to live where the natural food supply was more plentiful.

When fish began spawning in the spring, the tribe would move the entire village to coastal areas, traveling by canoe and using nets to catch fish. In the summer, they used hooks to catch several varieties of fish. Many men took to the sea to hunt wales and porpoise.

Woman and children also had a share in the work. They would gather scallops, mussels, crab and clams, which are still important parts of the economy and food supply in New England today.

From Spring through fall, the Algonquin also hunted migratory birds and gathered eggs. They also harvested berries and nuts. By the time Sptember rolled around, the Algonquin were ready to leave the coastal areas and head toward the forest, where the men hunted moose, caribou, deer and beaver.

Native American history facts show that winter was a lean time for the Algonquin. They took down their wigwams and lived communally in longhouses. They had to survive largely on stored food and in the northern lands, it was common for people to fast for several days at a time in order to ensure the food supply lasted through the winter.